Warm Up to Ice Fishing in Stowe

Early March is one of the best times of the entire year to ice fish Stowe! 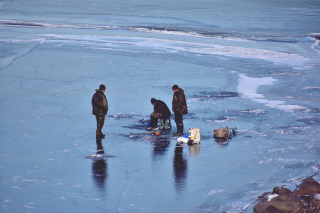 As Stowe, Vermont can annually find itself blanketed in snow for almost six whole months, ice fishing is traditionally-known as one of the top outdoor activities that both the young and young-at-heart can pursue. Whilst this type of outdoor fun in Stowe is prevalent throughout the colder months, the high point for the sport always seems to fall in late February and early March. Thus, now is the perfect time for you to start thinking about taking your very own Vermont ice fishing excursion.

What is the difference between ice fishing in Stowe and the warmer style of angling that many are more accustomed to? A LOT! If you have never tried your hand at ice fishing, don’t worry. Patience is the key to this sport and the professional instructors at The Fly Rod Shop right here in Stowe will ensure that you learn all of the essentials to catching some beautiful rainbow trout! They offer classes and instruction for the whole family, including special classes for younger children each Wednesday from the David Gale Recreation Center. All gear and bait will be provided by the Shop so you will be able to ice fish Stowe in no time.

For safety reasons, you need to watch the conditions of the ice as the days bring us closer to spring. Yet now, if you come to fish Stowe, you will be sitting along a hole in the ice with your rod or tip-up placed right in the icy water below, patiently waiting for a catch to come. Ice fishing in and around Stowe continues through the end of March, and if you plan on partaking in this icy angling, book a room with us at The Green Mountain Inn. Located in the heart of Downtown, let us be your comfortable home-away-from-home to return to. We’ll keep the fireplace roaring just for you!

Got Stick? The Hyde Cup Hockey Tournament Returns in March

The annual Hyde Cup hockey tournament is five full days on non-stop puck play for all levels of skaters. 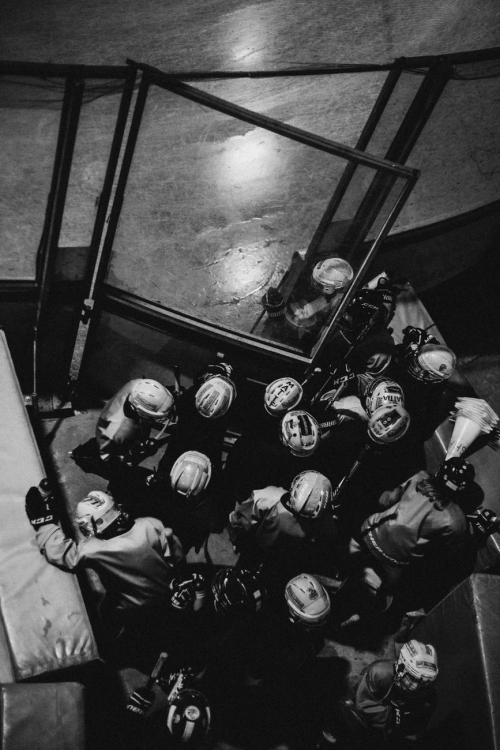 The ‘Great One’ coined the famous phrase “You miss 100% of the shots you never take”. Thus – follow Wayne Gretzky’s advice and plan on joining the entire greater Stowe, Vermont community for the annual Hyde Cup hockey tournament. An event unlike any other, this five-day hockey tournament is open to all levels of skater and stick-handlers. As with any large scale tournament, there are a few caveats, of course. To participate in this Vermont hockey tournament, you must be 18 years or older (no high school students). You must register for the Hyde Cup either in person or through a mail-in form. And – that’s it! Well… that is all you need to get yourself out on the ice for some hockey in Stowe starting on Tuesday, March 10, 2020. Still, the Green Mountain Inn has a little more back-story on this annual tradition if you need extra convincing.

The Hyde Cup tournament is not about winning. Fighting is forbidden and will get you a lifetime ban. This tournament is all about fun! This may seem to be the polar opposite of the competitive nature hockey can bring out of you, but this tournament is about bringing together skilled and novice players, young and old, to foster the love of the game and a sense of community. Over the course of the five days, newbies and veterans will both have a chance to shine. What other hockey tournament gives the new players TWO points for every goal they score? That is just one of the little unique twists that make this Vermont hockey tournament so special. The tournament started in 1993 as the Jackson Cup but was renamed to honor one of the regular players after she lost her battle with cancer. Players came out to play in Leslie Hyde’s honor and thus a new sense camaraderie and community was formed, an aspect of the tournament that is still prevalent today.

So have either Mr. Gretzky’s words or our history motivated you to pick up the stick and get ready for puck drop? If you plan on coming to play a little hockey in Vermont, register for the tournament and allow us at The Green Mountain Inn to be your home-away-from-home for the five days of fun at the rink. Conveniently located only a half a mile away from Stowe Arena, the home for all of the Hyde Cup tournament action, our comfortable accommodations and upscale amenities will provide a perfect complement to your time on the ice. All it takes is all you’ve got – we hope to see you out on the ice this March!

Live by the Sun, Love by the Moonlight Snowshoe in Stowe!

Support Stowe Land Trust and make plans to join them for their Moonlight Snowshoe in Brownsville-Story Ridge Forest this March. 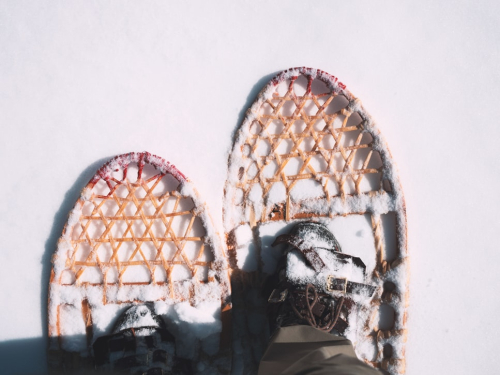 Moonlight drowns out all but the brightest stars in the sky and makes this Stowe snowshoeing event truly special. If you feel that you were born to chase the moonlight or just want to get caught up in the last vestiges of our winter wonderland for yourself, be sure to keep March 6 open on your calendar! Snowshoeing in Stowe may always be a fun winter activity, yet this event will show you a different side of the natural beauty of our Green Mountain majesty. Hosted by the board members of the Stowe Land Trust (SLT), an organization that is dedicated to conserving our area’s scenic landscape, their Moonlight Snowshoe in Brownsville-Story Ridge Forest is a two-hour stroll with only the moon (and their expertise of the area) as your guide! It is not only a perfect chance to stay active in Stowe this winter – it is FREE and open to the public!

If you have ever been snowshoeing in Vermont, you will have no problem with this two-hour winter walk through the rolling foothills of the Worcester Range. If this will be your first time, there are a few things to remember before you get out and decide you wish to explore Stowe by snowshoe. First, the event takes place on Friday, March 6, 2020, at 7:00 PM. Meant to be an ‘after-work outing’, the leisure walk through the Brownsville-Story Ridge Forest will take place no matter if it is clear or cloudy weather. You should dress in warm layers and bring any provisions you feel you need for the hike. Also needed – snowshoes (poles are optional though recommended due to the nature of the event).

Ready to run and meet the moon? Even though the event is open to the public, SLT asks that you please register to let them know that you plan on joining them for one of their last Stowe winter activities of the year. After registering, keep planning your night to remember by booking a room us at The Green Mountain Inn. Conveniently located three miles away from the Brownsville-Story Ridge Forest, the starting point for the walk, we will have you to the moon and back to the cozy comfort of our accommodations just in time to snuggle up by our fireplace with all of the moonbeams still dancing in your head.

Dash Through the Snow With These Private Sleigh Rides!

Come on, it’s lovely weather to still take a sleigh ride together this winter in Stowe! 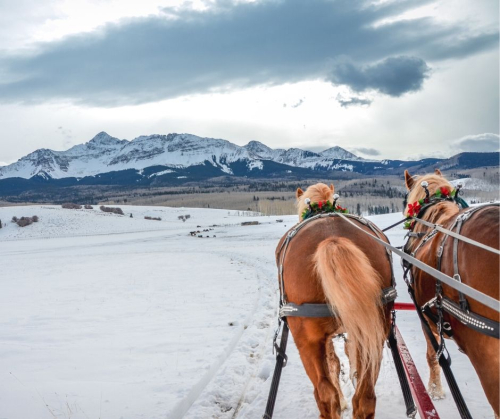 The holiday music may no longer be on your playlist, but the feeling of the season is still very much alive in Stowe, Vermont. If you flip through the catalog of cherished songs that we continually play each December, there is one tune that still rings true each and every week this winter in Stowe at the beloved Trapp Family Lodge. This institution of the community is always one of the top places to venture for winter activities in Stowe. And for three days a week, you can experience the picturesque beauty of the countryside by taking one of their cherished private sleigh rides!

Can’t you just hear those sleigh bells jingling? The Trapp Family Lodge Sleigh Rides are available by appointment only. On each and every Wednesday, Saturday, and Sunday, you can schedule these professionally guided sleigh rides in Stowe by the half-hour with a maximum capacity of 8 people. Of course, adults and children are welcome on these Stowe sleigh rides and it is truly the perfect way to spend an afternoon taking in the scenery around these parts with your family, friends, or just that special someone.

Don’t miss your chance to experience this one-of-a-kind activity for yourself! Book today and when you do, plan on making The Green Mountain Inn the home-away-from-home in Stowe that you return to. Your cheeks may be rosy when you come through our doors but you will soon be comfy and cozy in the modern comfort of our historically charming accommodations. Located in the heart of downtown Stowe, we are less than five miles away from the Trapp Family Lodge. Take the road before you and join us for a winter rendezvous in Green Mountain style!